You ever looked at your other half and thought: ‘I would love to swap you for a takeaway for one, the payment of my Wi-Fi bill, or just a sum in the region of £16’…?

The 40-year-old from Hamburg, known only as ‘Dorte L’, said she had been married to her other half for seven years but had realised over the festive period that enough was enough.

The advert, titled ‘Husband, Used’, read: “Dear women who may be interested.

“Over the first two days of Christmas I have realised that we simply don’t belong together any more. I would like to give up my husband.

“I am happy to negotiate the price. But no exchange. Please send me inquiries over email.” 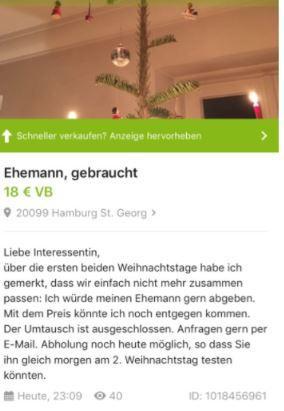 The advert said her husband was free for collection on Christmas Day. Credit: eBay

She added that he was available for collection on Christmas Day and could be ‘road tested’ on Boxing Day.

Speaking to the Hamburger Abendblatt, she said her husband was unaware of the advert until the newspaper uncovered the story.

She said: “The advert was very well received. I got a lot of positive feedback and someone sent me a lot of smiley emoticons.

“I didn’t want to make a drama out of it at all. It was just for some amusement.”

It may seem like an unconventional use of the online market, but ‘Dorte L’ is by no means the first to use the site for unorthodox transactions.

Earlier this year, a man tried to sell his house on eBay because he was sick of ‘time-wasters’.

Homeowner, Chris Pollitt, said: “It’s been on the market around six months, and in that time I’ve had about eight or nine viewings, but you can tell straight away none of them were serious.

“Since posting on eBay I’ve had a few messages and they all seem to be more interested in actually buying the place than just coming for a look around.”

That’s not to say the flexibility afforded by the site is without hazards… Just ask the bloke from Kent who tried to sell an ornamental owl on the site without paying full attention to what was in the background of his photos.