As you probably know, there is currently an outbreak of Dog Flu in the South Bay and more recently, a number of cases have cropped up in other areas around the Bay. All dog owners, including myself, are understandably concerned about what they can do to reduce the likelihood that their dogs will be infected. However, there is no need to panic.

Although Canine Influenza, or dog flu, is extremely infectious, it usually causes only mild symptoms for a few days to a couple of weeks and the dogs normally make a full recovery despite treatment. Yes, complications from the flu can occasionally be fatal, (usually older dogs with an already compromised respiratory system, or dogs that develop secondary bacterial Pneumonia) but the mortality rate is actually very low, much less than deaths that occur from complications with human flu.

When considering the risk of infection, maintaining perspective is essential: 1. To objectively evaluate the seriousness of the disease; 2. To take realistic precautionary measures to avoid infection; and 3. If infected, to avoid infecting others.

Canine Type A influenza virus has been around for a while in the US. Type A H3N8 influenza first appeared in racing greyhounds in Florida in 2004 and has since spread to most states. In 2015, the first outbreak of Type A H3N2 influenza occurred in the Chicago area and the same strain subsequently caused an outbreak in Southwest Seaboard and Gulf states in 2017.

H3N8 was thought to have mutated from a form of equine influenza and H3N2 from avian influenza. However, there is no evidence that the canine influenza virus can infect people. (The canine Type A H3N2 influenza virus is very different from the H3N2 viruses that cause seasonal outbreaks of the flu in people.

The canine influenza virus is spread via respiratory secretions, primarily from coughing, sneezing and barking but also, by objects, such as, toys, food and water bowls, on surfaces, and by people (hands and clothing) who have recently handled infected dogs. Most dogs shed the virus within one or two days after infection and sometimes before showing clinical signs.

Shed virus may remain infective in the environment for two days and for 12-24 hours on hands and clothing. The virus infects nearly all dogs that have been exposed. Most develop clinical signs within a day or two, others appear healthy but still shed the virus.

Usual clinical signs include, coughing (usually moist, but occasionally dry), nasal discharge, lethargy and lack of appetite and usually clear up after a few days or a couple of weeks with or without treatment. However, some dogs may develop pneumonia, usually from secondary bacterial infections, or preexisting conditions.

Pneumonia is extremely serious and life-threatening. Owners should go straight to their vet if their dog has a temperature of 104°F or greater, a purulent nasal discharge, or rapid/shallow, or labored breathing.

There is often a tendency to panic when our dogs’ health is threatened. Evaluating and following the prevention protocols for similar diseases in people, in this case, human Type A influenza virus, helps put things into perspective. Precautionary measures include, preventing infection (maintaining a healthy lifestyle, vaccination, disinfection) and preventing infected individuals from infecting others (isolation). 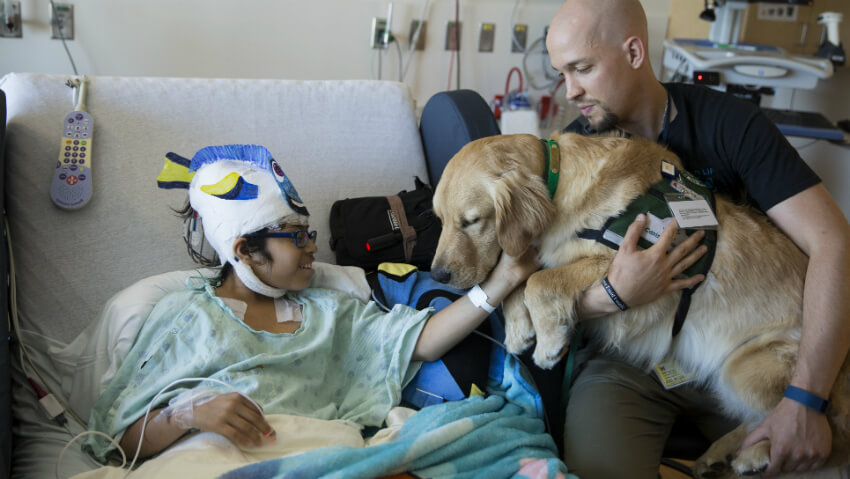 All Type A influenza viruses spread like wildfire, however, there are some marked differences in the spread of animal diseases and human diseases. Human influenza spreads much quicker, over a considerably greater area and the mortality rate is higher compared to canine influenza. People are exposed to far more people each day than dogs are exposed to other dogs. People travel greater distances by car, train and plane and for example, a single sneeze on a plane can turn a local pocket of infection into an epidemic, or pandemic.

During the present flu-season in California, over 100 people (less than 65 years of age) have died from complications related to influenza. The death toll for people older than 65 is considerably greater and usually not quantified. A large number of people, especially elderly people (like me), already have compromised respiratory systems from smoking, or underlying medical conditions.

Precautionary measures for dogs should be similar to and adapted from those for people trying to avoid catching the annual flu and spreading it to others. With dog diseases though, these precautionary measures are much easier to implement and considerably more effective. 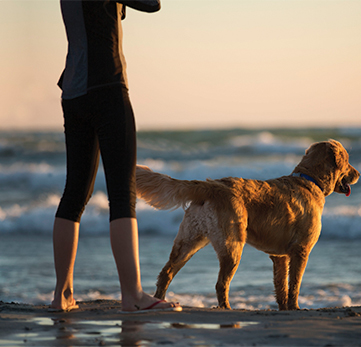 A lot of dogs lead healthier lifestyles than their human companions. Dogs eat a healthier and more balanced diet and they exercise more, even if not regularly taken for walks or to the park. (Dogs perform yoga-stretches and calisthenics most every time they stand up.) Dog’s don’t smoke. To put it bluntly, dogs are much healthier than people. Dogs, even elderly dogs, have less compromised lungs and therefore, are less likely to develop life-threatening, secondary bacterial pneumonia.

Human influenza may occur at any time in the year but usually spreads globally at a rapid pace during the winter months, precipitating an annual flu-season and occasionally, reaching epidemic proportions. The human flu vaccination protocol is to vaccinate as much of the world’s population as possible.

Canine influenza may also occur at any time in the year but because most dogs seldom travel great distances, the disease generally stays confined to isolated, well-defined geographical pockets. Thus, the easiest way to avoid infection is to avoid the infected areas and the vaccination protocol comprises immunizing as many dogs as possible around the periphery of the infected area and then working inwards.

A bivalent vaccination is available that affords protection against both strains of the Type A canine influenza virus. Of course, developing vaccines for Type A viruses is akin to shooting at a moving target because the virus is continually morphing and mutating. However, if not preventing infection entirely, the vaccine may successfully reduce both the severity and duration of infection.

The AVMA considers canine influenza immunization to be a “lifestyle” vaccination. Whether or not to vaccinate depends on where your dog lives and its exposure to other dogs.

Perhaps the best news is that Type A viruses appear to be easily destroyed by common disinfectants, such as bleach, or quaternary ammonium products.

The easiest way to prevent the spread of infection is suspending travel, especially to and from infected pockets, isolating all infected dogs and limiting healthy dogs from interacting with unfamiliar dogs (that may or may not be infected). Whereas, we can’t ask dogs to cover their muzzles when sneezing or coughing, it is much easier to isolate dogs than people. Dogs don’t need to go to work and might enjoy a staycation with delightfully-stuffed chewtoys. All infected dogs should be isolated for four weeks.

First and foremost, precautions vary greatly depending on where you live. If there have been no outbreaks in your immediate area, continue life as normal, although maybe consider vaccinating your dog for future protection. If you live close to a local outbreak of canine influenza, read on:

Nonetheless, I would still take similar precautions visiting a veterinary clinic with my dog as I would take going to a hospital myself. As with any unvaccinated puppy, keep the dog in the car and carry it straight to the examination table and then once vaccinated, carry it back to the car. If the dog is too large to carry, keep its nose from sniffing the ground in the car parking lot and the floor of the waiting room and after the visit, clean its paws with disinfectant wipes before letting it back in the car, or walking home. Some veterinary clinics will examine and vaccinate your dog in the car.

For dogs that are walked regularly, whether or not you decide to vaccinate your dog depends on how many dogs your dog meets, whether or not canine influenza is rife in your area and of course, your level of concern.

For puppies and dogs attending training classes, the risk of infection is very low but vaccination is also an option since class registration is scheduled in advance. For adult dogs, registration may be postponed until after vaccination. For puppies though, if you miss class, your puppy must be home-schooled — trained by you and safely socialized with numerous people.

(It is impossible to turn back the clock with socialization!) Most trainers are already pretty savvy vis a vis disinfection protocols (in order to prevent parvovirus) and isolation protocols — any dog that coughs repetitively (kennel cough) or has diarrhea is asked to take a break from class until healthy. Perhaps the best statistic is that in 35+ years of teaching off-leash puppy classes, we have never had an infected puppy infect other puppies in class, i.e., occasionally, we have had infected puppies/dogs in class — some showed signs of disease (and were asked to leave) but others appeared healthy, but … the rest of the class remained healthy over the following weeks.

ISOLATION IS ABSOLUTELY ESSENTIAL FOR INFECTED DOGS. Please don’t take infected dogs onto public property where it may shed virus and infect other dogs. Please keep your dog confined to your home for four weeks. Make it fun. Feed your dog’s entire daily ration in hollow chewtoys.

For puppies, obviously dog-dog socialization is on hold, BUT do not neglect socialization with people. Invite lots of people to the puppy’s house to socialize and play with your pup. As added precautions, maybe only invite non-dog owners and have all visitors leave their outdoor shoes outside. Remember, living with the dog flu for a couple of weeks is nothing compared with living with an unsocialized dog for 12 years.

Moreover, when puppies are insufficiently socialized, they grow up to lack confidence and social savvy around people and subsequently, when they enter the adolescent “avoidance stage” of development, become progressively shy, standoffish, wary, fearful and anxious around people, yet most days, they have to confront their biggest fear, i.e., people!

The essential question is How Dangerous is Canine Flu? Certainly, the media has talked about “deadly dog flu”, but facts are: 1. Most outbreaks have been relatively small in numbers; 2. Confined to small isolated pockets; and 3.

Nationwide, a very small number of dogs have died from complications from the flu. It is so important to maintain perspective, to be objective and not to panic but instead to take obvious precautions and get on with our lives, just as we do with human flu.

As of yet, doctors have not advised children not to attend schools/colleges, or people not to go to work for fear of catching the flu and so, with the above common-sense precautions, there is no reason to cancel dog school, working trials, dog shows/competitions, or play groups, or to close down dog parks, kennels and shelters.