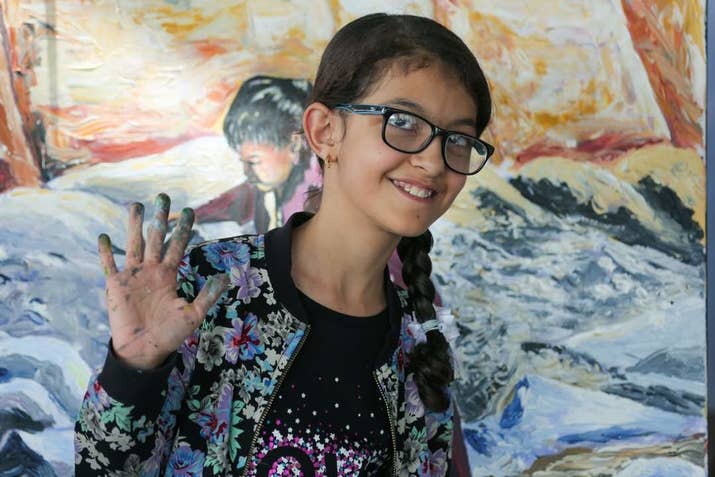 A 14-year-old Yemeni schoolgirl has written a letter describing her life inside Yemen’s four-year-old civil war.

Hanin al-Asaadi’s family, her sisters, 17-year-old Khulood and 16-year-old Asma, as well as her 5-year-old brother, Yousef, live with their parents in Yemen’s capital, Sanaa. Her mom, Shams, looks after the family while her dad, Mohammad, used to be a journalist but now works for UNICEF.

In the letter, given to BuzzFeed News by UNICEF, Hanin describes how she and her sister were nearly killed when a series of airstrikes targeted the park where they played. “Third strong bombing exploded, it was [too] near to us, bombing’s fragments, stones and dust fall on us like heavy rain drops, we went back home scared,” she wrote.

Yemen’s civil war intensified in 2015 when a coalition of Arab nations (led by Saudi Arabia) attempted to push back the Houthi rebel forces who had taken the capital, Sanaa, in 2014.

The Houthi rebels are fighting the internationally recognized government, which is supported by the Saudi-led coalition. As of March this year, at least 10,000 people have died in the fighting and around 40,000 people have been injured.

International aid agencies estimate that 75% of the population is in need of humanitarian assistance: Just over 8 million people are at risk of starvation. Medicines are in such short supply, and the country’s infrastructure so damaged, that thousands died in a huge cholera outbreak last year. 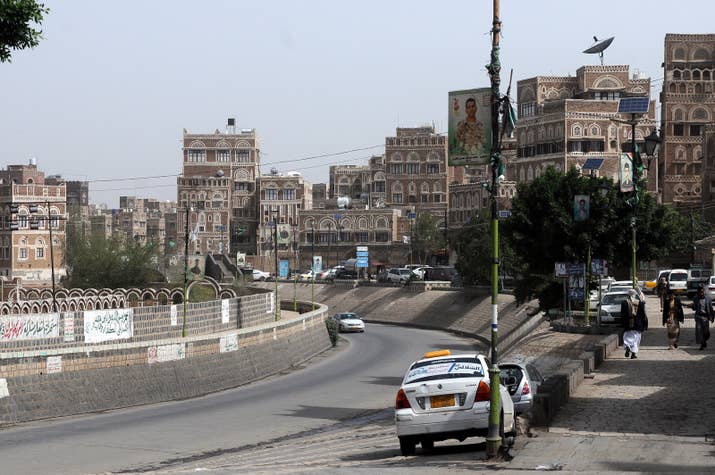 Hanin’s life is “really different” to what it was like before the war. “We used to travel to all cities of Yemen, take the boats, climb mountains, swim in the sea,” she told BuzzFeed News via email. “We used to enjoy our time even if we are at home.”

“Suddenly without any introductions the crazy war began,” she said in her letter. “Families were dispersed, friends got separated. Most of my close friends have traveled and I haven’t seen them since this damn war began.” 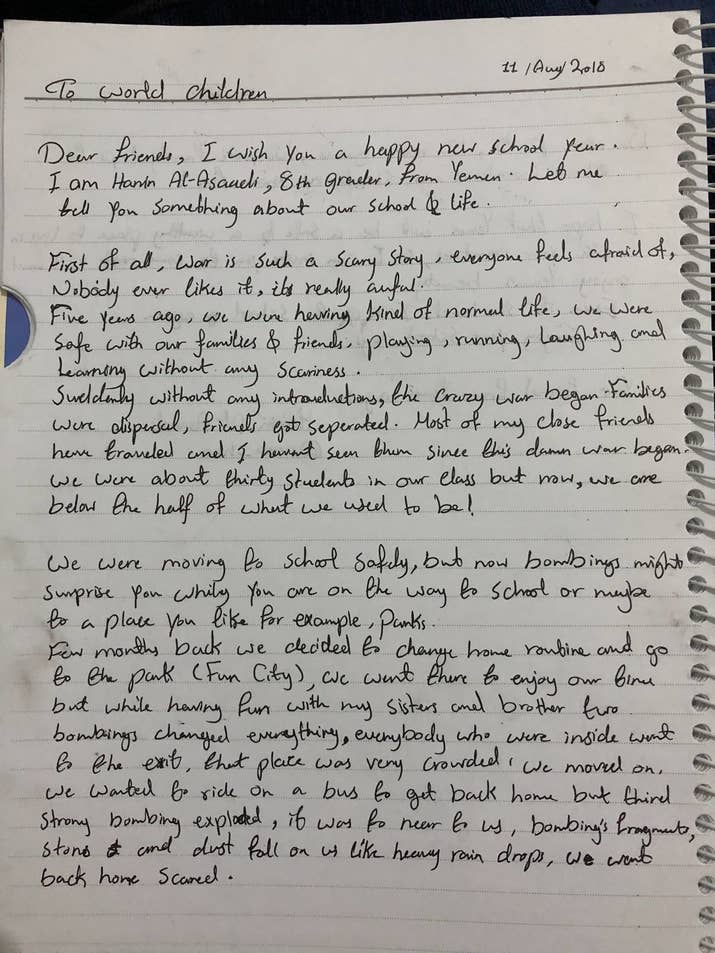 “War is such a scary story, everyone feels afraid of, nobody ever likes it, it’s really awful.”

Although there used to be as many as 30 children in her class, most of her friends and their families have left the capital and the country, if they could. More than 2 million Yemenis have fled due to the fighting, according to the United Nations Refugee Agency.

But ordinary life continues: Every day Hanin gets on a bus and goes to her school. “We were moving to school safely, but now bombings might surprise you while you are on the way to school or to a place you like, for example, the parks.”

The danger is heightened by recent attacks: Only a few weeks ago, 40 children were killed in a airstrike on a bus during a school trip. Most of the children were aged between 10 and 13 years old.

The attack caused international outrage, especially after it was revealed to have been carried out by the Saudi-led coalition. In total, 51 people died in the strike, which Saudi Arabia (after initially calling the attack “legitimate”) later said it would investigate.

“It broke my heart,” Hanin’s father, Mohammed al-Asaadi, told BuzzFeed News. “I felt for the fathers and mothers who sent their kids out to school in the morning but never came back home. I felt for the innocent dreams of these little ones — how in a flash of a second they were all crashed.”

Al-Asaadi explained how he tried to shield Hanin and his four other children from Yemen’s war — but that it was getting harder and harder. “I didn’t tell my kids about the incident. I always try to keep them away from such dreadful news. They have been through a lot.” 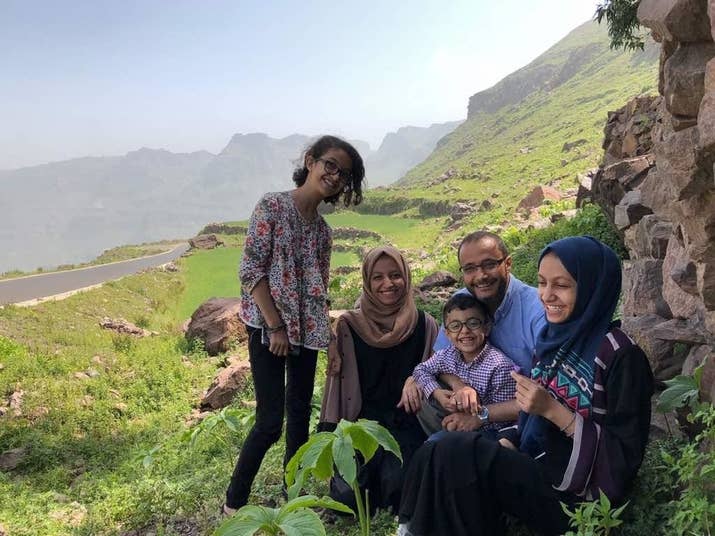 “It is all war and bombing,” the 43-year-old said via email from Sanaa. “[The] future is very unpredictable here in Yemen. It is uncertain where this war is taking us to. Nobody knows when guns will shut up. Extremely difficult to plan as situations change by the day if not by the hour — and of course — to the worse.”

Al-Asaadi said his youngest son, 5-year-old Yousef, had known only war. “I won’t be exaggerating if I say that ‘boom, boom’ were of the very first few sounds/words he started to utter as a toddler.”

When he saw what his daughter wrote he was deeply conflicted about how the war had affected his children’s lives. “I felt sad and somehow helpless at how deep this war has been engraved in everything they think about.

“In a way, I felt proud of my daughters’ resilience and self-motivation to keep going to school in spite of the increasing safety risks and threats.”

And despite everything, Hanin wants to keep studying, because school is one of the few places she doesn’t feel alone. Her favorite classes are math and cosmology — “I love NASA and I want to be part of it.”

In their breaks, Hanin said she and her friends talk about what is happening in their country. “Then we talk about our dreams.”

Dear friends, I wish you a happy new school year.

I am Hanin Al-Asaadi, 8th grader, from Yemen, let me tell you something about our school and life.

First of all, war is such a scary story, everyone feels afraid of, nobody ever likes it, it’s really awful.

Five years ago, we we’re having kind of normal life, we we’re safe with our families and friends, playing, running, laughing, and learning without any scariness.

Suddenly without any introductions, the crazy war began. Families were dispersed, friends got separated. Most of my close friends have traveled and I haven’t seen them since this damn war began.

We were about thirty students in our class but now, we are less than the half of what we used to be!

We were moving to school safely, but now bombings might surprise you while you are on the way to school or maybe to a place you like for example, parks.

Few months back we decided to change home routine and go to the park (Fun City), we went there to enjoy our time but while having fun with my sisters and brother two bombings changed everything, everybody who were inside went to the exit, that place was very crowded, we moved on, we wanted to ride on a bus to get back home but third strong bombing exploded, it was to near to us, bombing’s fragments, stones and dust fall on us like heavy rain drops, we went back home scared.

No more parks, no more games, no more family trips to climb mountains, in short no more fun!

I hope that Yemen will be a safe and wealthy place to live in like your countries, so I can invite you to come visit and enjoy Yemen’s beauty.

Even it’s so hard I will go to school again.

Your friend from Yemen again.