‘Bohemian Rhapsody’ is not an ordinary song. You don’t just casually give it a listen – you have to brace yourself.

There’s just nothing ordinary about it.

It’s fitting then that the Queen anthem has another extraordinary accolade to add to its list, having become the most streamed song from the 20th century.

Lucian Grainge, chairman and CEO of UMG, said: “‘Bohemian Rhapsody’ is one the greatest songs by one of the greatest bands in history.

“We are so proud to represent Queen and are thrilled to see the song still inspiring new fans around the world more than four decades after its release.

“My congratulations to Queen and [longtime manager] Jim Beach on an incredible achievement that is a testament to the enduring brilliance of Queen.”

Guitarist and founding member of the rock band, Brian May, also expressed his gratitude through a water current-based analogy.

He said: “So the River of Rock Music has metamorphosed into streams. Very happy that our music is still flowing to the max.”

The band’s song, which was written by the late Freddie Mercury, has enjoyed a big boost on streaming services following the release of a biopic named after the song, in which Rami Malek plays frontman Mercury.

Five weeks on from its release, the film has grossed $600 (£476) million – the highest box office of any musical biopic ever made, according to Reuters. Malek has also been nominated for a Golden Globe for his role and has been tipped to receive an Oscar nomination next year. 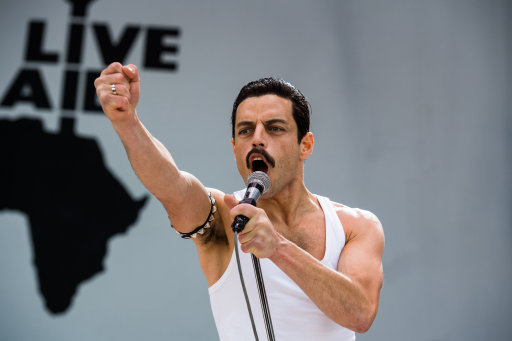 Malek has been tipped to receive an Oscar nomination for his portrayal of Freddie Mercury. Credit: PA

‘Bohemain Rhapsody’ is the only song to have been the UK’s Christmas number one twice. It was also at number one in the UK charts for nine weeks in a row, which was a record at the time.

The song has since been covered by numerous brave artists, including Robbie Williams, Kanye West and Pink.

It’s all really quite incredible, when you consider the song wasn’t even given a chance of making the airwaves, let alone selling, when it was first recorded.