A police dog was killed after saving officers’ lives during a shootout with suspects wanted for attempted murder and armed robbery.

The shootout took place outside a South Florida shopping mall on Monday evening and resulted in shoppers hiding under tables.

According to USA Today, the three-year-old dog pursued a fleeing suspect, who shot the animal. Officers returned fire, severely wounding the suspect.

He gave his life to save others. He’s a good boy and he will never be forgotten. Rest In Peace #K9Cigo pic.twitter.com/7Snb2LvVFt

Sheriff Ric Bradshaw said Cigo ‘did his job and saved those deputies’ lives’.

Police swarmed the mall at around 5pm on Christmas Eve after getting a tip that a member of the Latin Kings gang was there.

The Miami Herald reported that officers secured an area of the parking lot outside the mall and waited for the suspects to come out.

The Sheriff’s Office also posted a heartbreaking video of Cigo’s handler devastated from the loss and hugging colleagues who lined up to comfort him. 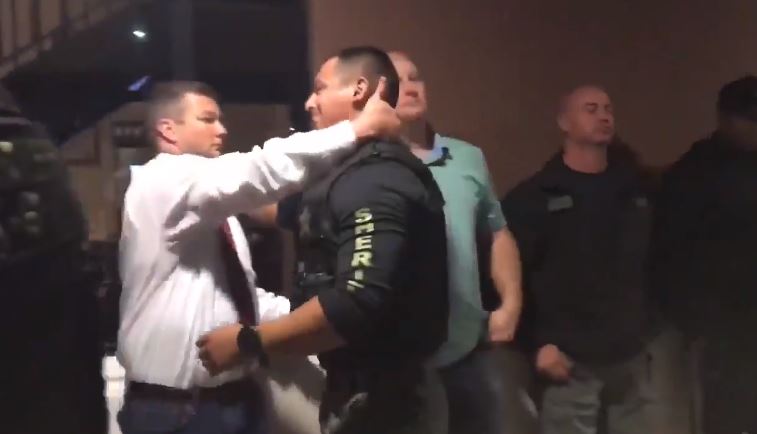 Cigo’s handler was confronted by colleagues after the dog was shot dead. Credit: Twitter/@PBCountySheriff

Since posting the video on social media, messages of condolence have been flooding in.

One wrote: “Nothing can help heal your sorrow, except time. I love seeing this kinda brotherhood, but not for this reason. #K9Cigo #mansbestfriend #brothersinblue”.

Another added: “As a dog lover and a Law Enforcement supporter I’m watching this with tears streaming down my face. I’m so very sorry.”

And a third commented: “Praying for peace and comfort for #K9Cigo’s partner, I can’t imagine the pain he is feeling tonight. Rest In Peace Cigo you are a #Hero and your wings will be mighty. God Bless.”

My heart, thought and prayers go to #K9Cigo's partner tonight. I am so very sorry for your loss. I know it is a deep and personal loss. God bless and comfort you in this difficult time. 💔🕯️🙏🐕🚔

In a statement, Sheriff Ric Bradshaw said: “The reason we want to get them is they are dangerous people.”

The suspect at the mall had reportedly met up with two others – one of whom was the suspect in an attempted murder that happened a couple of weeks ago.

The man Cigo was chasing when he was shot hasn’t been identified and is in hospital with Bradshaw explaining: “He is not deceased yet. He is pretty well wounded.

“The dog is deceased, but he did his job,” Bradshaw said. “Saved those deputies’ lives.”

Cigo made the ultimate sacrifice, what a hero.