India says it lost one MiG21 fighter and a pilot is missing in action.

Pakistani PM Imran Khan said the two sides could not afford a miscalculation with the weapons they had.

India and Pakistan claim all of Kashmir, but control only parts of it. They have fought three wars since independence from Britain in 1947.

All but one were over Kashmir.

The aerial attacks across the Line of Control (LoC) dividing Indian and Pakistani territory are the first since a war in 1971.

They follow a militant attack in Kashmir which killed 40 Indian troops – the deadliest to take place during a three-decade insurgency against Indian rule in Kashmir. A Pakistan-based group said it carried out the attack.

The BBC’s Soutik Biswas, in Delhi, says the challenge for India and Pakistan now is to contain the latest escalation before things get completely out of control.

What did Imran Khan say?

In a televised address, he warned against further escalation.

“If we let it happen, it will remain neither in my nor Narendra Modi’s control,” he said. 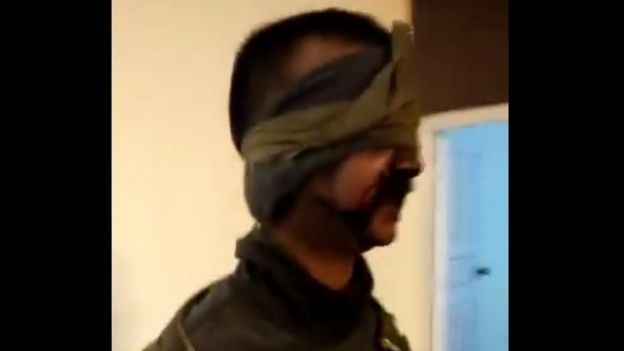 Mr Khan referred to air strikes by Pakistan across the LoC earlier on Wednesday, saying that Pakistan had been obliged to respond to Tuesday’s air strikes by India against militant targets in north-western Pakistan.

“Our action is just to let them know that just like they intruded into our territory, we are also capable of going into their territory,” he said.

He added that Pakistan had offered to help with India’s investigation into the Pulwama attack.

Mr Modi has not yet made any comment, but Indian Foreign Minister Sushma Swaraj said her country would act “with responsibility and restraint”.

“India does not wish to see further escalation of the situation,” she said, speaking from a meeting with Russian and Chinese foreign ministers in China.

What do we know about the pilot?

Pakistan’s information ministry published but subsequently deleted a video purporting to show one of the Indian pilots that the Pakistani military says it has captured.

In the video, the pilot – who is blindfolded and appears to have blood on his face – identifies himself as Wing-Commander Abhinandan.

The ministry also tweeted what it said was footage of one of the downed Indian jets.

In India, Ministry of External Affairs spokesman Raveesh Kumar acknowledged the loss of a jet and its pilot.

He also said that an Indian plane had shot down a Pakistani fighter jet and Indian ground forces observed it falling on the Pakistani side of the LoC. Pakistan has denied any of its jets were struck.

What about the earlier air strikes?

Pakistan’s assertion that it had shot down two Indian aircraft came shortly after Islamabad said its warplanes had struck targets in Indian territory.

Pakistan said it had “taken strikes at [a] non-military target, avoiding human loss and collateral damage”.

Indian authorities said the Pakistani jets had been pushed back.

In response to PAF strikes this morning as released by MoFA, IAF crossed LOC. PAF shot down two Indian aircrafts inside Pakistani airspace. One of the aircraft fell inside AJ&K while other fell inside IOK. One Indian pilot arrested by troops on ground while two in the area.

India said Tuesday’s air strikes on Balakot in north-western Pakistan killed a large number of militants but Pakistan said there had been no casualties.

The US, EU and China have all called for restraint.