A group of men in Estonia who rushed to help a dog they found in a freezing-cold river were shocked to discover that the ‘pooch’ was actually a wolf. Well, easy mistake to make, isn’t it?

Workers at the Sindi dam on the Parnu river saw the ‘dog’ in the water and quickly cleared a path to the animal and carried into one of their cars before heading off to a vet’s surgery to get it checked over.

Workers in Estonia rescued a ‘dog’ that turned out to be a wolf. Credit: EUPA

But while there they were given the surprise news that their new four-legged friend was in fact a wild wolf.

The Estonian Union for the Protection of Animals (EUPA) told Postimees that when the wolf was brought in it had low blood pressure, which could explain why the wolf was so docile.

Rando Kartsepp, one of the men who picked up the wolf, told the paper: “We had to carry him over the slope. He weighed a fair bit.

“He was calm, slept on my legs. When I wanted to stretch them, he raised his head for a moment.” 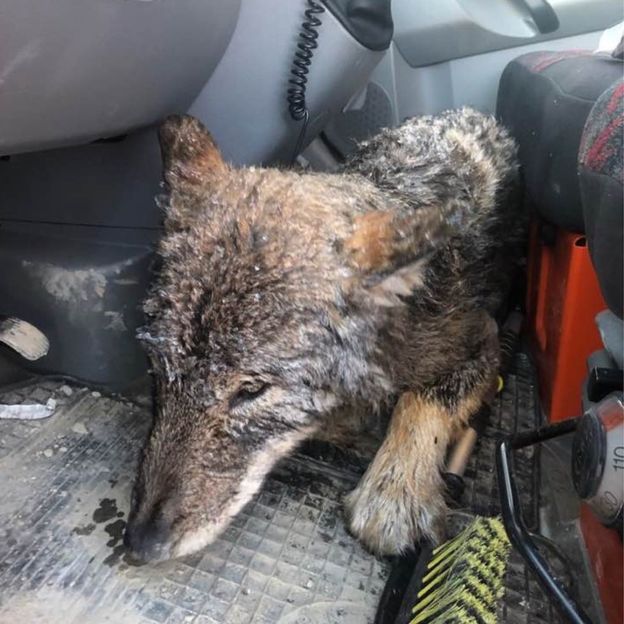 Vets treated the wolf and re-released it into the wild. Credit: EUPA

Aww, cute – except for the part where they could have all been torn to shreds.

Vets at the clinic were initially suspicious that the dog may, in fact, be a wolf, but it wasn’t until a local hunter saw it that it was confirmed that the animal was a young wolf – around one year old, BBC reports.

Once it was established that it wasn’t a dog, vets decided to err on the side of caution and put him in a cage post treatment, in case he woke up and felt like doing his Big Bad Wolf impression.

The EUPA paid for the wolf’s treatment. It was right as rain the next day, and was fitted with a GPS collar by the national environmental agency before being released back into the wild.

A spokesperson from EUPA said: “We are so happy for the outcome of the story and wish to thank all the participants – especially these men who rescued the wolf and the doctors of the clinic who were not afraid to treat and nurture the wild animal.”