Kinder ice creams have dropped in the UK and they’re just everything we’ve ever wanted.

After years of being teased by the knowledge that our European counterparts have been able to enjoy the ice cream goodness, here’s some good news: Kinder Ice Cream Sticks and Kinder Bueno Ice Cream Cones are here.

The sticks are 40 percent whole milk ice cream, dipped in Kinder chocolate, and they only contain 62 calories – meanwhile the Kinder Bueno cones might take a few more gym sessions to burn off, as they contain a heftier 204 calories. 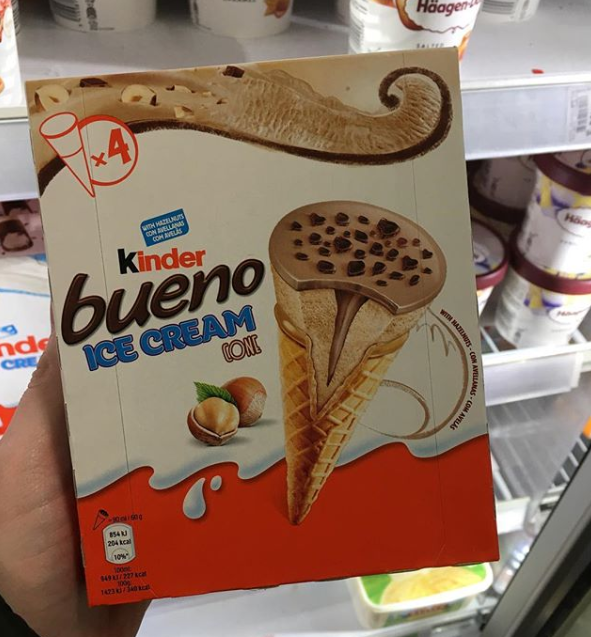 The frozen treats have sent fans into a bit of a frenzy after being spotted by the Instagram account NewFoodsUK.

One person commented: “I’m so jealous I’ll never get to try any of these things you post from Asda.”

Another commented: “We need these.”While a third said: “OMG Need to go Asda.”

The ice cream treats are the result of a joint venture between Ferrero and Unilever, to create a product that follows the nutritional criteria for children’s ice cream under the Kinder brand.

In the Unilever guidelines it says the ice cream must follow guidelines for reducing fat and sugar while preserving the taste. It must also adapt portion sizes for children and ensure the treat itself doesn’t exceed 2 kcal per gram, which corresponds to a low energy density.

There’s also a range of Kinder ice cream sandwiches, which I think might be the best news I’ve heard in ages.

These aren’t the only new frozen treats to have hit the shelves of Asda superstores.

It was recently announced that Cadbury had released tubs of Double Decker ice cream – which looks amazing.

A photo of the ice cream was posted to the Instagram account kevssnackreviews – run by a bloke called Kev who goes out on the prowl to hunt down the newest, greatest snacks so we don’t have to (aka our hero).

It doesn’t appear to be available on the Asda website just yet – or anywhere else for that matter – but no doubt soon it’ll be in freezers in homes across the UK pretty soon.

Cadbury actually released Double Decker ice cream a short while back – but in individual bar form, rather than a big tub.