France may be forced to declare a state of emergency after a day of carnage in Paris, amid calls to send in the army to quell an outburst of civil unrest.

Violent protesters occupied the centre of Paris yesterday and torched cars, smashed windows with clubs and axes and clashed with riot police firing tear gas and water cannon on the Champs-Elysees, in France’s worst urban rioting in more than a decade.

The ‘yellow vest’ protests, which began as a rebellion against fuel prices but has expanded into weeks of civil unrest, spread across the country yesterday and ended with 133 people injured, including 23 police officers, and 412 arrested last night.

Today the French government said it would consider imposing a state of emergency to end the violence, as President Emmanuel Macron vowed to bring the rioters to justice.

Macron, who is returning from the G20 summit in Buenos Aires, will hold a crisis meeting today with his prime minister and interior minister in a bid to quell the challenge to his presidency.

A government spokesman said it was ‘out of the question that each weekend becomes a meeting or ritual for violence’ after a second consecutive Saturday ended in violent carnage in Paris. There were some reports of further protests planned today although the previous

A state of emergency would allow extra powers to the forces of law and order, ranging from stop-and-searches to carrying out raids on the homes of suspected rioters, amid calls for the army to be called in.

The Arc de Triomphe itself was among hundreds of buildings attacked by the protesters on Saturday as the Champs-Elysees was reduced to a warzone in the centre of the French capital.

Protesters set fire to cars and Christmas trees, hurled barricades at police, smashed up windows and graffitied the 19th-century arch – while calling for Macron to resign – in violence which continued into the night.

On the facade of the towering 19th-century arch, protesters scrawled in big black letters: ‘The yellow vests will triumph’, while along the Champs-Elysees, peaceful demonstrators held up a slogan reading, ‘Macron, stop treating us like idiots!’

France last brought in a state of emergency in 2015, following terrorist attacks by Islamic State, which lasted until November 2017.

Protesters said the riots yesterday were the ‘start of a revolution’, in violence which echoed the near-revolution of 1968.

‘We are in an insurrectional climate,’ said Frederic Lagache, of the Alliance police union, which called for the State of Emergency. 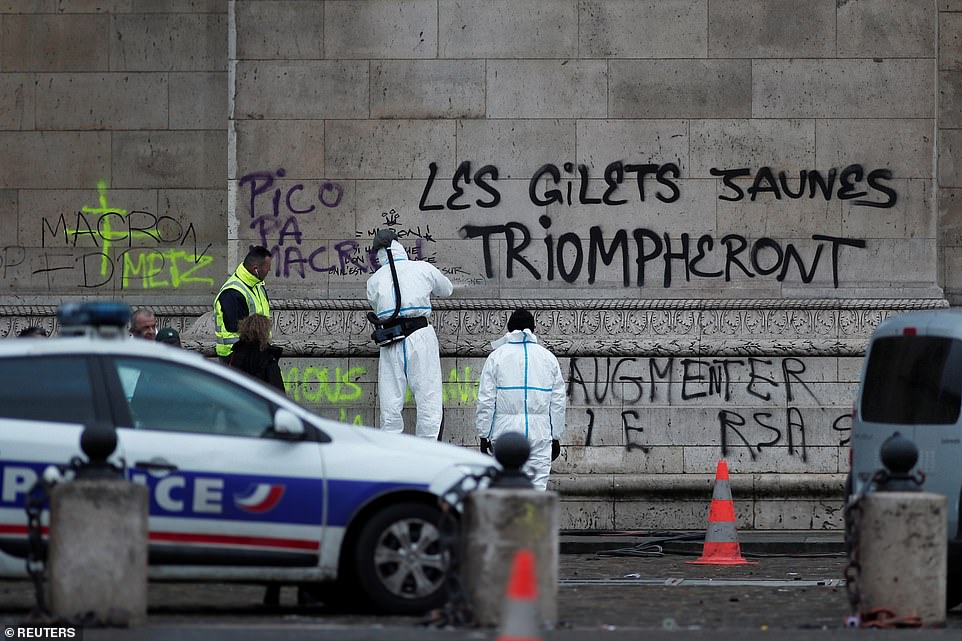 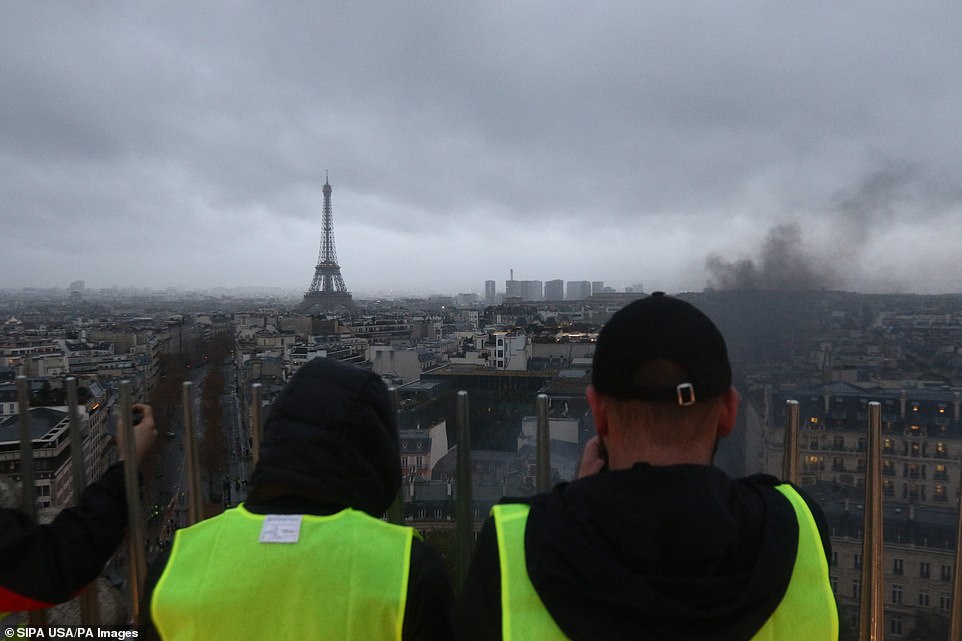 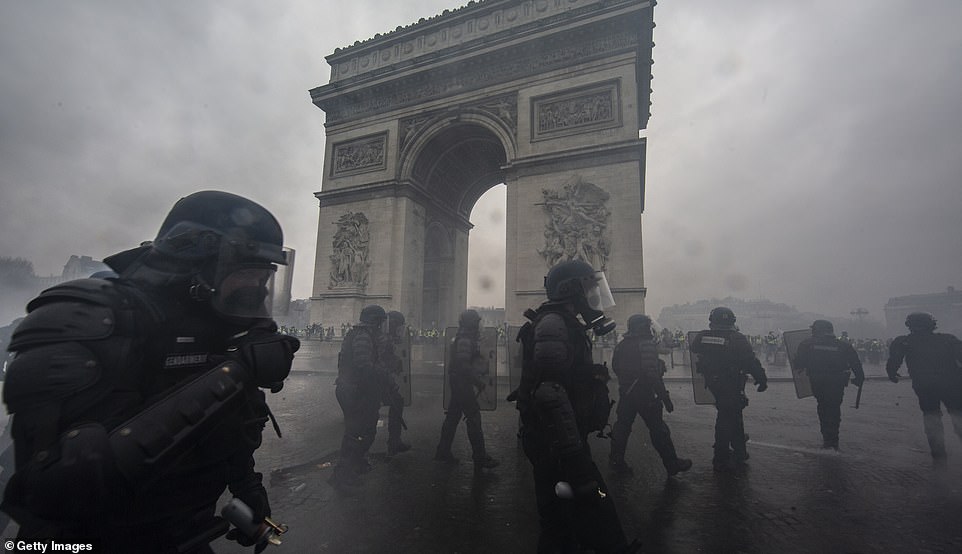 Riot police take control of the Place de l’Etoile, which surrounds the Arc de Triomphe at the end of the Champs-Elysees

A police car burns after clashes between police and protesters, in Marseille, in what has become a national protest movement

Police take position as they face demonstrators in Marseille, southern France, as protests spread out across the country 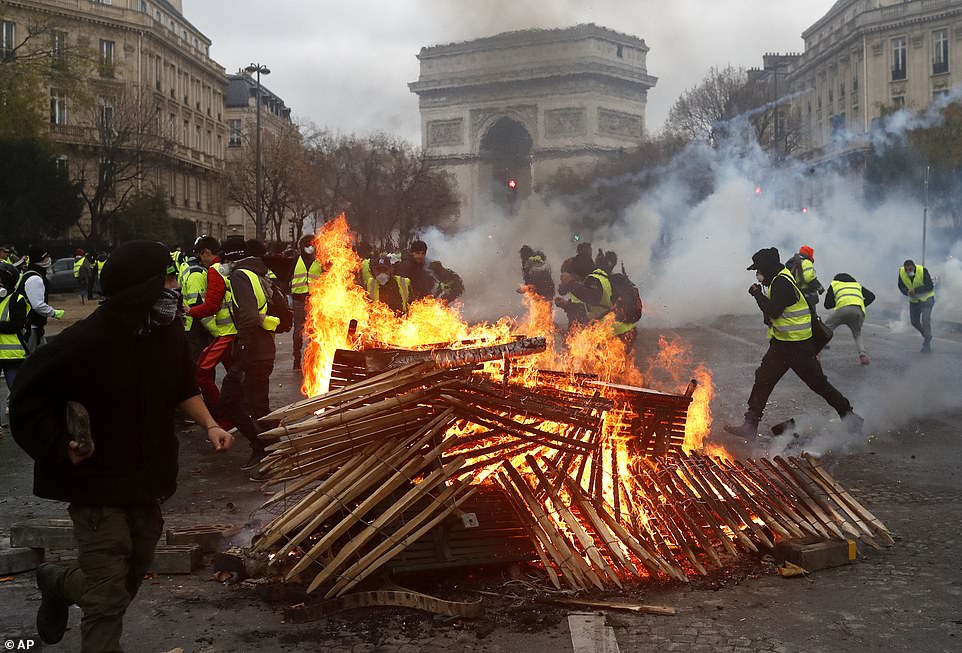 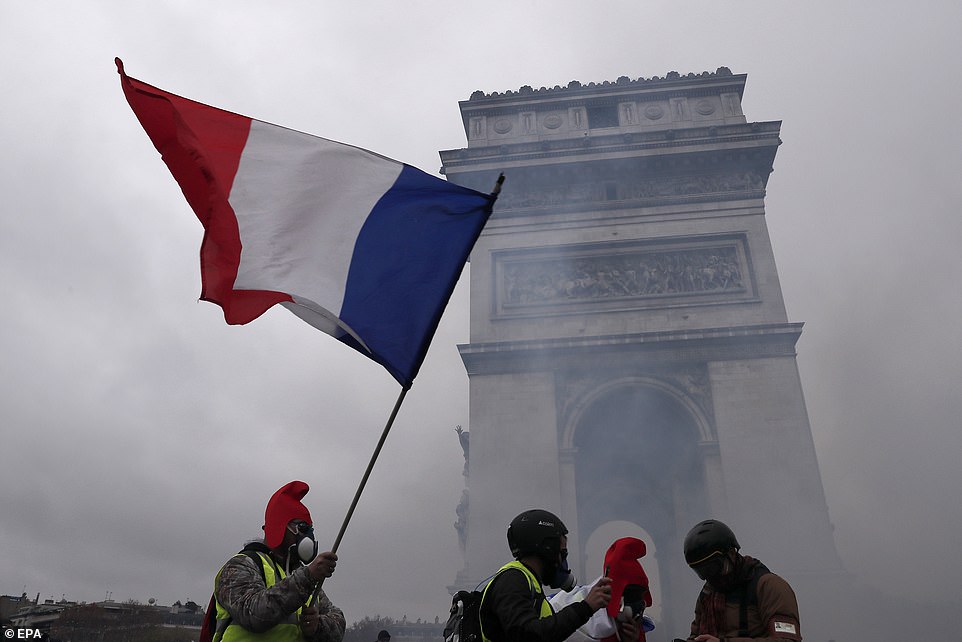 Protesters wearing masks, helmets and the movement’s signature yellow vests wave a Tricolore flag in front of the Arc de Triomphe on the Champs-Elysees

Mr Lagache said ‘army reinforcements’ should be brought in to guard public monuments, freeing up the police to deal with other trouble spots.

Sixteen identity check points and police barricades had been set up on the Champs Elysees for the first time in its history in an attempt to avoid rioting but the measures failed to halt the anarchy in Paris.

Condemning the violence, Macron  said: ‘No cause justifies that authorities are attacked, that businesses are plundered, that passers-by or journalists are threatened or that the Arc du Triomphe is defiled.

‘Those guilty of this violence don’t want change, they don’t want improvements, they want chaos. They betray the causes that they pretend to serve and which they manipulate.

‘They will be identified and brought to justice for their actions. I will always respect debate and I will always listen to opposition but I will never accept violence’.

The ‘yellow vest’ or ‘gilets jaunes’ movement was first prompted by Macron’s move to raise the price of diesel fuel in a bid to encourage less polluting cars.

Motorists took to the streets wearing the high-visibility yellow jackets which drivers are required to carry in their vehicles in France, giving the movement its name.

Since then the protest has gathered momentum and taken aim at the high cost of living and wider dissatisfaction with Macron’s presidency. 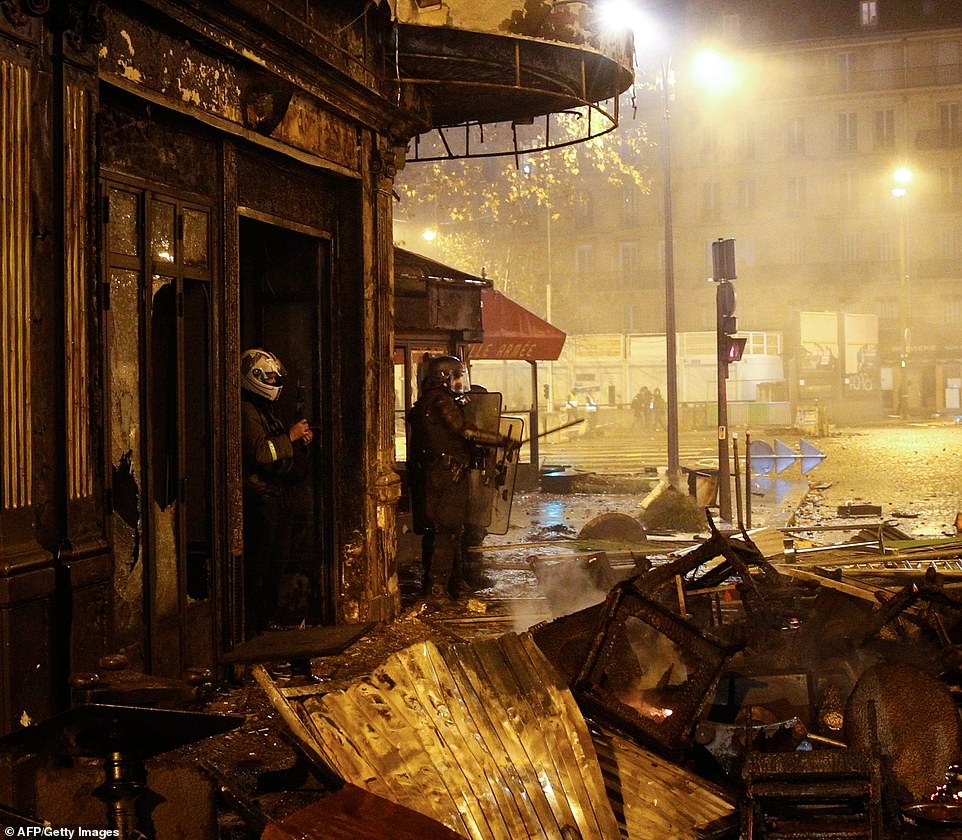 Smoke can be seen rising in the distance, in a picture taken from the top of the Arc de Triomphe amid the rioting 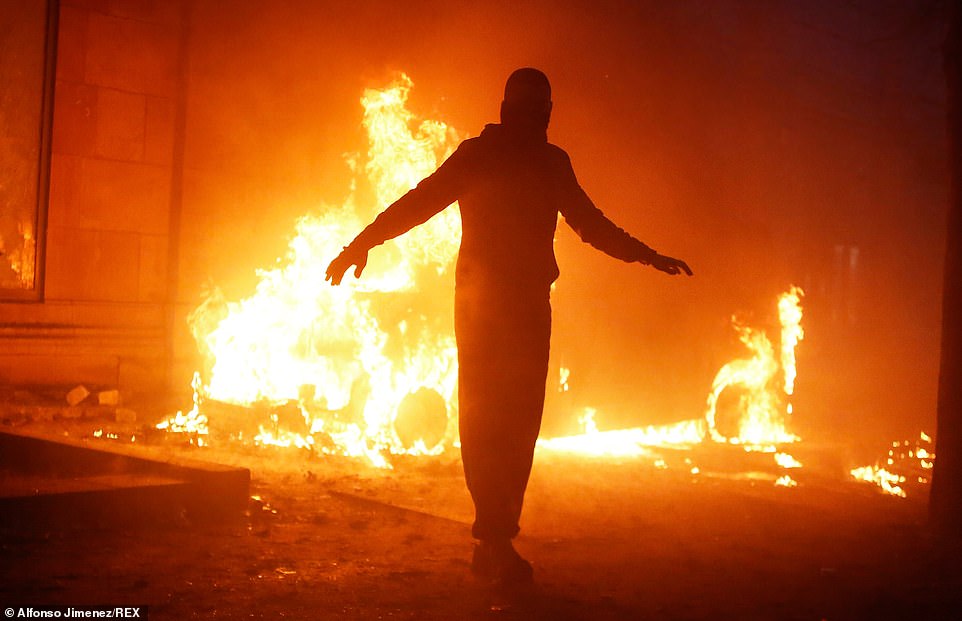 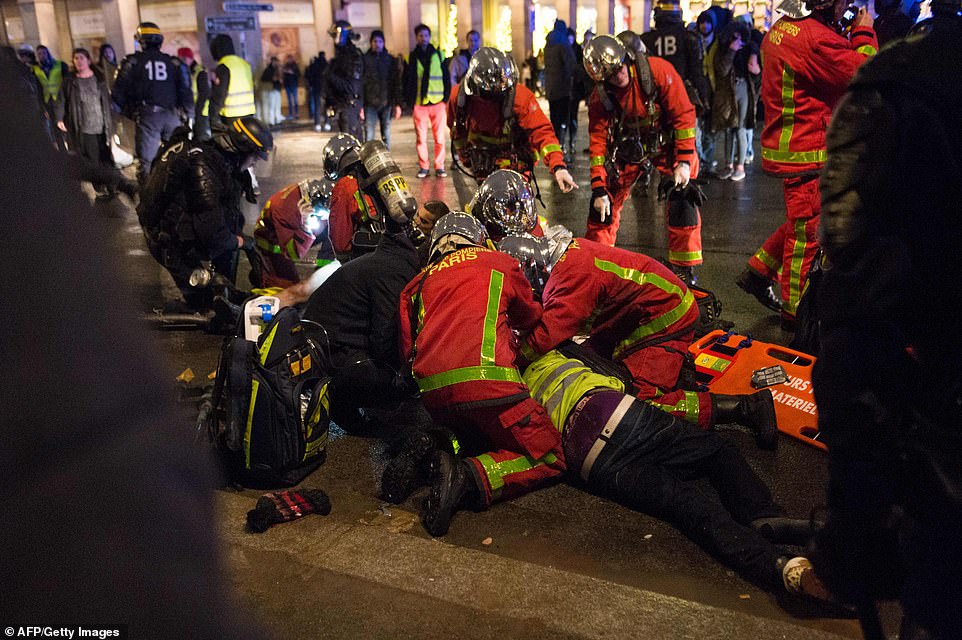 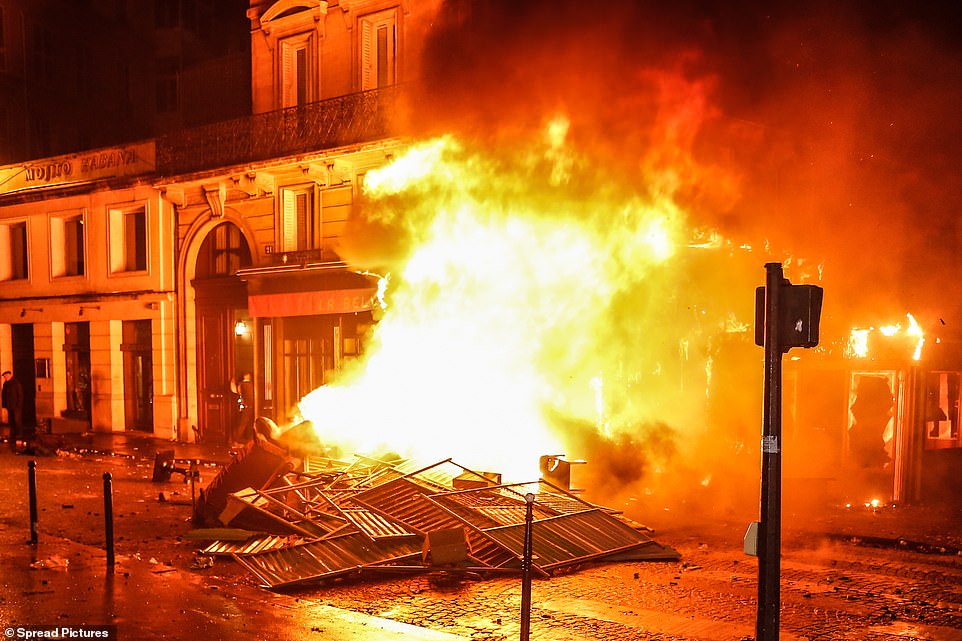 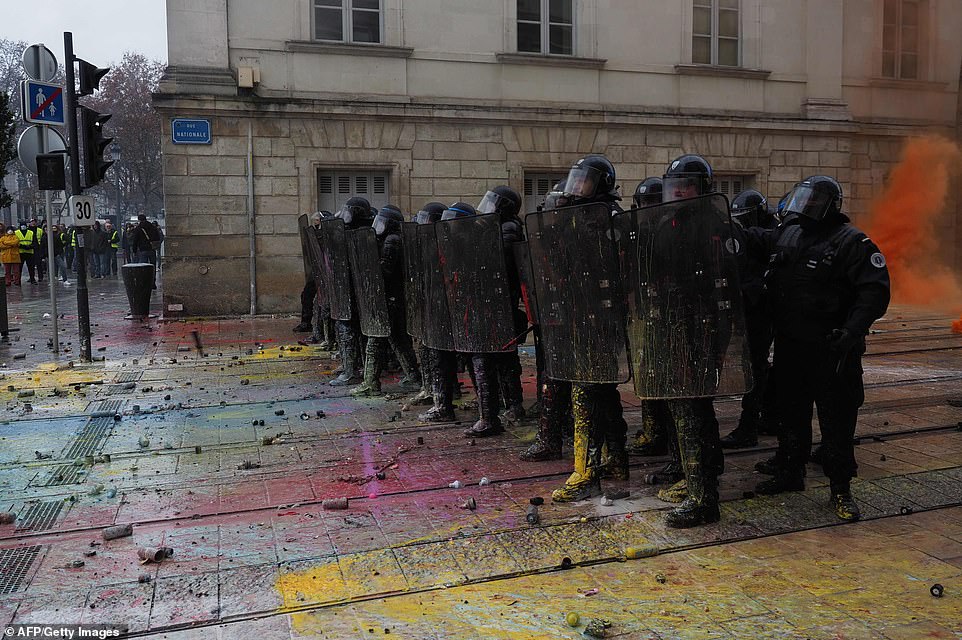 The protests yesterday spread beyond Paris as demonstrators wearing the same high-vis vests blocked a motorway in Biarritz in the south-west of the country and let off yellow smoke grenades in Marseille, France’s second-largest city.

The yellow-jacket protests even spread to The Hague, in the Netherlands, where people gathered outside the Dutch parliamentary building on Saturday.

The French government has faced difficulties dealing with the protesters as the movement has no real leadership and has not aligned itself with any political organisation.

Macron has sought to douse the anger by promising three months of nationwide talks on turning France into a low-carbon economy without penalising the poor.

He also vowed to slow the rate of increase in fuel taxes if international oil prices rise too rapidly but only after a tax hike due in January.

On Friday, the government tried – mostly in vain – to talk to representatives of the movement.

Eight were invited to meet Prime Minister Edouard Philippe but only two turned up, and one walked out after being told he could not invite TV cameras in to broadcast the encounter live to the nation.

The protests have caught Macron off guard just as he was trying to counter a fall in his popularity rating to 30 per cent.

His unyielding response has exposed him to charges of being out of touch with ordinary people.