A man and a woman are being investigated by Egyptian authorities after a picture of them appearing to have sex on top of the Great Pyramid of Giza went viral.

Danish photographer Andreas Hvid shared a picture on his website of himself and a girl seemingly having sex in the missionary position on top of the famous landmark.

A video on YouTube also appears to show the pair scaling the pyramid. The footage was initially thought to be fake, however, prosecutors are now investigating the video’s authenticity.

In the video’s description, Hvid says: “In late November 2018, a friend and I climbed the Great Pyramid of Giza (aka Pyramid of Khufu, Pyramid of Cheops). Fearing to be spotted by the many guards, I did not film the several hours of sneaking around at the Giza Plateau, which led up to the climb.”

The description also includes a link to the ‘nude art’ photo. The video itself closes with the girl, whose face is blurred, removing her top. 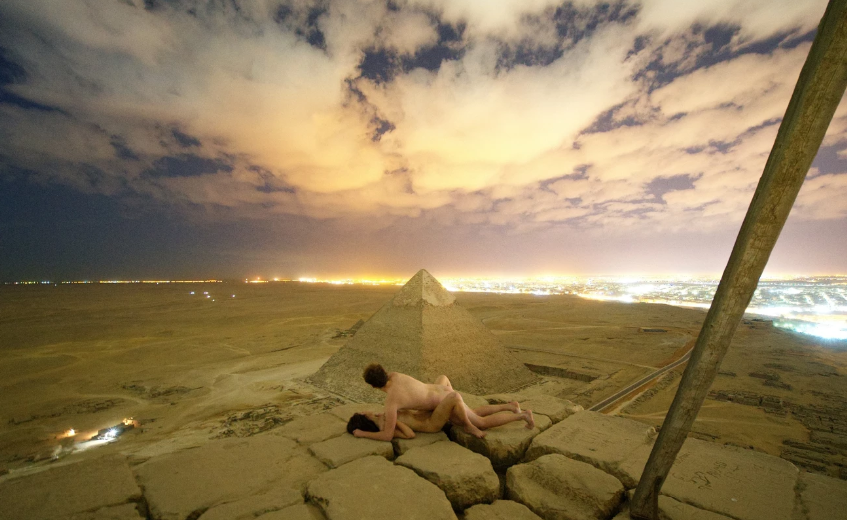 The 4,500-year-old pyramid is one of the seven wonders of the ancient world and scaling it is strictly forbidden. Visitors are allowed to climb up to a certain level before 5pm.

If the video is found to be genuine, prosecutors are also likely to punish any officials deemed negligent in enabling them access.

Mostafa al-Waziri, the head of Egypt’s antiquities council, believes the image may have been created with photo-editing software, according to Masry al-Youm newspaper.

But Mr Hvid has insisted the video and the photo are genuine, and says he has been saddened by the backlash.

Speaking to Danish newspaper, Ekstrabladet, he said: “For many years I had dreamed of climbing the great pyramid. The idea of making a ‘nude shoot’ up there had also existed for some time.

“I’m sad that so many people have become so angry. But I have also received a positive response from a lot of Egyptians – something I think is worth remembering.”

He also denied the pair were having sex, insisting they were merely posing nude for the photo.

Many people on social media have criticised their behaviour.

One person said: “Shame. Lack of respect for an ancient civilisation.”

Another said: “On behalf of historians and archaeologists everywhere, I hope you both end up in jail.”

Scaling the pyramids was banned in the 1980s after numerous tourists died attempting to reach the summit of the 146-metre-high structure.

A German teenager was given a lifetime ban from Egypt in 2016 after climbing the pyramid and taking pictures and videos.