Doja Cat is under fire after she tweeted Tuesday night about using the word “faggot” in high school.

Lines from it like “Bitch, I’m a cow” and “Got milk, bitch? Got beef?” also became a meme.

In an interview with Complex, the singer called the song’s success “crazy.”

“It’s really crazy this blew up because it’s been four months since we released my first studio album and we’re planning this tour,” she told the outlet earlier this month. “For this to happen right before we take off is hugely surreal.” 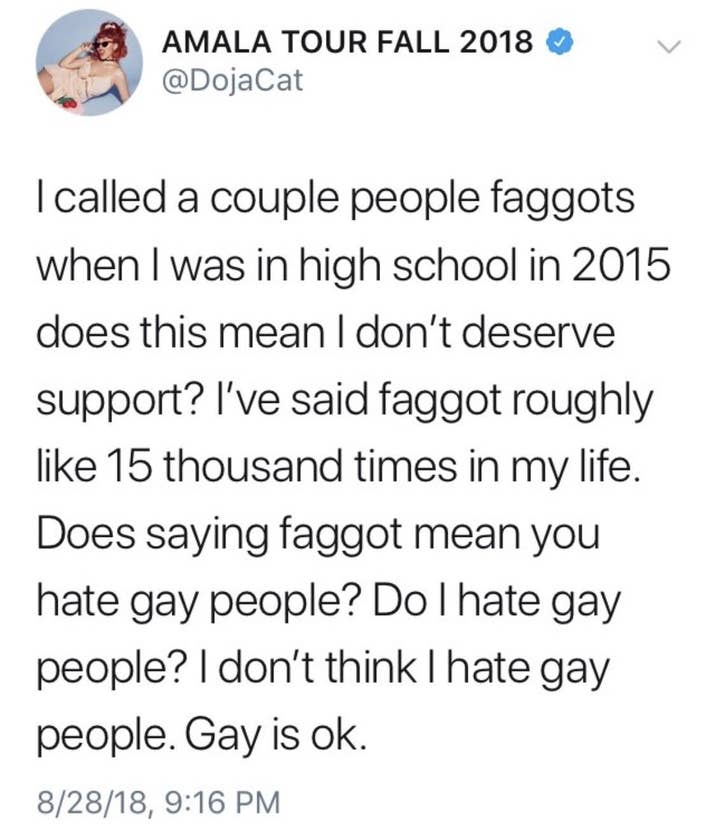 The tweet resulted in a wave of backlash, with people, including star Debra Messing, discussing it. “How can you be so ignorant?” Messing tweeted, @-ing the star.

SERIOUSLY, @DojaCat?! How can you be so ignorant? Do know how many people you are hurting? Use your fame and platform for Good. It’s a privilege. pic.twitter.com/5ZiqI3ZVJw

Many people also made jokes about the artist’s explanation.

Doja Cat apologized, but soon after deleted the apology. It lives on in a screenshot obtained by a Polygon reporter.

“I’ve used horrible derogatory and hateful words towards people out of ignorance,” the artist began.

She said that she doesn’t want people “to look at [her] as a roll [sic] model.”

When asked for comment, a representative for the artist directed BuzzFeed News to a second apology the musician posted on Twitter on Wednesday.

“I truly apologize to anyone that I’ve offended or deeply hurt with my words,” Doja Cat tweeted.

A number of people referenced these lyrics in their response to the artist’s tweet, Tuesday night:

According to a bio on RCA Records website, the artist has been releasing music since her teens.

Her album Amala was released on RCA Records in March and her national tour begins next month.