Danny Dyer has spoken about what he thinks should happen with ISIS bride Shamima Begum after he was asked on Good Morning Britain for his opinion on the matter.

The 41-year-old EastEnders actor surprised viewers when he admitted that he thought Begum, now 19, should be allowed to return to the UK after she fled to Syria four years ago when she was radicalised.

Danny Dyer weighs in on the debate on whether Shamima Begum should be allowed back in the UK. pic.twitter.com/8grO2O93eE
– Good Morning Britain (@GMB) February 18, 2019

When he started speaking about the issue, he asked: “How has it got into her head that going to Syria at 15 years of age is the answer when she lives in this country? What is that about?

“Who’s there to guide her, talk to her – why is she so lost within her soul that she thinks that’s the answer to go to Syria?”

Good Morning Britain host, Richard Madeley, 62, then blamed the internet for her radicalisation, saying: “She wouldn’t have gone it if wasn’t for the internet. That’s the game changer in our society.” 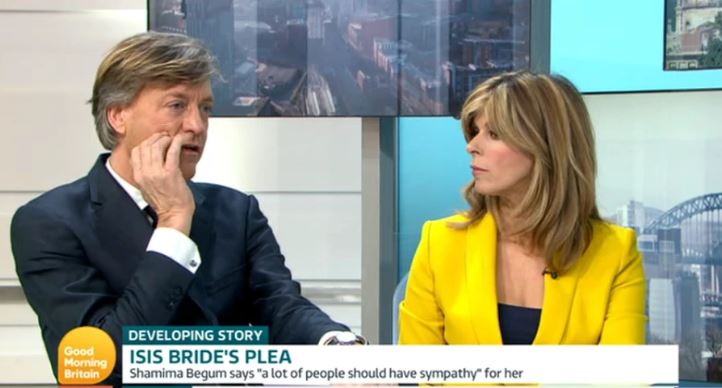 And a baffled Danny hit back telling him: “We’ve all got the internet, Rich. Are you thinking of going to Syria? I mean, seriously?”

He then added: “Radicalised though and actually jumping on a plane at 15 and going to Syria – I don’t understand what’s going on there. And now she wants to come back.”

Danny said he thinks she should be allowed to return to the UK. Credit: ITV/Good Morning Britain

When he was asked whether he believes she should come back, Danny said: “Yes, I do.

“I feel she needs a chance, maybe to explain what was going on and maybe we can understand a bit more how they got to her and how she thought it was the right move.

“She’s still a young girl, who was looking after her? Maybe we can learn from it, I don’t know.”