It is true that most good things can cause something that should scare us to never have it again but now experts are urging the government to do more in a bid to erase the cancer risk from processed meats like bacon and ham.

Campaigners say that nitrites – which are added to cure the meats and help preserve them – result in carcinogenic nitrosamines, believed to be responsible for bowel cancer.

Sky News reported that a 2015 World Health Organisation report classed processed meats as a group one carcinogen that could cause an additional 34,000 cancer deaths a year – which could equate to 6,600 bowel cancer cases in the UK annually.

Cancer specialists, NHS doctors and politicians, are among those backing the campaign to remove the nitrites saying that nitrite-free alternatives are safer.

Speaking to Sky News they said: “There is a consensus of scientific opinion that nitrites in processed meats result in the production of carcinogenic nitrosamines – and therefore increase cancer risk for those who regularly consume traditional bacon and ham.

Study found that processed meat, including ham and bacon, was a risk factor for bowel cancer. Credit: PA

“For these reasons, we are concerned that not enough is being done to raise awareness of nitrites in our processed meat and their health risks, in stark contrast to warnings regularly issued regarding sugar and fattening foods.

“We must work together to raise awareness of their risks and encourage the much wider use of nitrite-free alternatives that are safer and can reduce the number of cancer cases.”

“Government action to remove nitrites from processed meats should not be far away. The meat industry must act fast, act now – or be condemned to a similar reputational blow to that dealt to tobacco.” 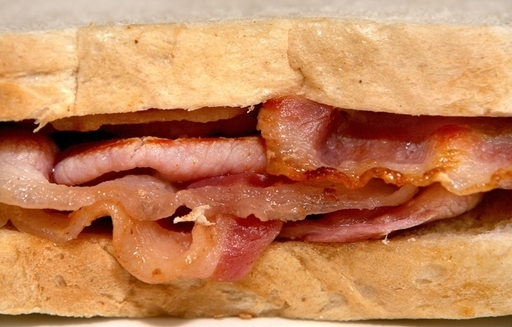 Dr Malhotra went on to explain that removing nitrites would not spoil the processed meat experience and explained that some producers such as Nestle were using natural alternatives to cure meat.

Parma ham is one meat that hasn’t used nitrites for 25 years – and look how much we love that.

A spokesman for the British Meat Processors Association told the BBC that nitrites helped to hinder microbial growth and protect against botulism, a serious form of food poisoning.

He said: “The industry is constantly looking at the levels of nitrites and nitrates, but reductions have to be balanced against the food safety issues and minimising waste.”