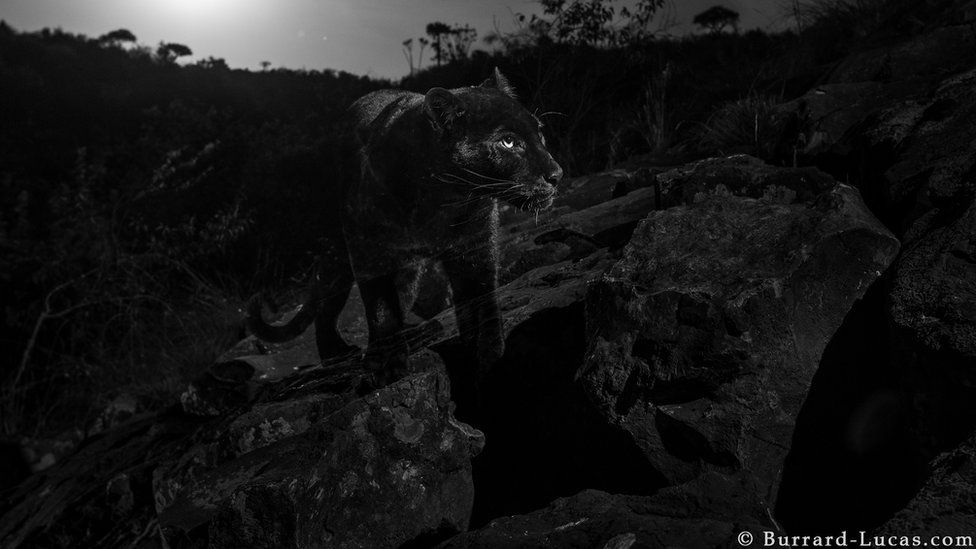 Black Panther has been everywhere in recent years – but spotting one of the animals the famous superhero is named after in the African wilderness is a little more rare.

Wildlife photographer Will Burrard-Lucas managed it – and there are even claims this is the first time anyone has captured a melanistic leopard on camera in Africa in 100 years.

Will heard rumours of a black panther – which is a loose term for a black leopard or black jaguar, depending where in the world it’s from – at the Laikipia Wilderness Camp in Kenya.

After following leopard tracks through the undergrowth with a guide called Steve, Will settled on a place to set up his Camtraptions camera traps.

“I’m quite used to doing camera traps and not actually achieving anything because it is such a speculative thing – you don’t know if the animal you’re trying to get is going to come down the trail that you’ve set the cameras up on.”

They weren’t sure whether the tracks they were following were those of the black leopard or a regular spotted one.

“I never get my hopes up, and after the first couple of nights I hadn’t got this leopard and I was beginning to think I’d be lucky if I get a photo of a spotty leopard, let alone this black one.”

On the fourth night though, his luck was in.

“I don’t think it sank in immediately what I’d managed to achieve, it was such an unusual subject.

“Usually on these camera trap photos with the flash you see the animal very clearly. But as it blended in with the black night so well all I could see was these eyes staring out of the picture.”

The black leopard Will captured is a male and based on its size, thought to be around two years old.

“We had always heard about black leopards living in this region, but the stories were absent of high-quality footage that could confirm their existence,” said Nicholas Pilfold PhD, lead researcher for a leopard conservation program in Laikipia County.

“Collectively these are the first confirmed images in nearly 100 years of a black leopard in Africa, and this region is the only known spot in all of Africa to have a black leopard.”

Kenya’s Daily Nation newspaper cast doubt on that claim though, reporting that a similar animal was photographed in 2013.

Will has left his cameras at the park in Kenya and is flying back in a few weeks to see what else they’ve picked up – but time to get more pictures is running out.

“At this age is when he’d usually get pushed out of his territory by a bigger, stronger male and go off to find his own territory – so it’s a bit of a race against time to get more photos.”

What makes a black panther?

It’s easy to think of black panthers as animals in their own right, but Will says that’s not the case.

“The term that makes them black is called melanism and it’s the same thing that makes a house cat black, or any other cat species.

“It’s kind of like albino but the other way.

“A black panther is basically a melanistic big cat. Typically in Africa and Asia that would mean a melanistic leopard – a black leopard.

“In South America it would be a melanistic jaguar – a black jaguar.

“Black panther is a looser term.”

Will captured a spotted leopard on one of the camera traps, which could be the black leopard’s dad.

You don’t need two black leopards to make one, but both parents need to carry the recessive gene for melanism.

Will says it’s hard to say how many leopards there are in East Africa, given how secretive they are

“And then add to that only a tiny, tiny fraction would be black?

“There might be a handful in east Africa that are black.”