Jay Z and Beyoncè have assured fans their tour will continue as normal after a stage invader brought their show in Atlanta to an abrupt halt Saturday night.

Footage posted to social media by fans shows the final moments of the show, as the couple exit the stage after performing their latest track “Apeshit.” Then someone in a white T-shirt and black shorts was seen to emerge from the audience and appear to follow them off stage.

Dancers then break into a run and follow after the intruder. Fans can heard to say: “It’s a fight!”

Yvette Noel-Schure, publicist for the couple – who were playing the Mercedes-Benz Stadium in Atlanta, where they will play again Sunday night – took to Instagram to thank fans for their concern and reassure the public that they are fine.

More footage captured the moment concert security stepped in to contain the situation as the dancers and band were briskly ushered off the stage.

This video, shot from a different angle, shows how the stage invader hopped on stage and weaved inbetween the dancers to follow the Carters backstage.

The couple, who are worth an estimated $1.25 billion, are currently on the North American leg of their On The Run II tour, the sequel to their first joint tour in 2014. 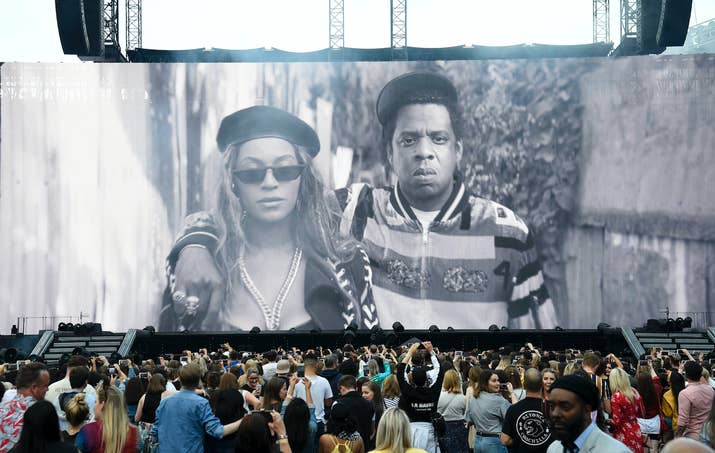 Fans used social media to voice their concern about the incident and some even suggested that the couple would be unlikely to stop at Atlanta again following the scare.

Y’all wondering why Beyoncé don’t do meet and greets no more. Which one of y’all Atlanta gays got on stage and tried to run on Jay, like that! You thought!

And y'all wonder why Beyoncé doesn't do backstage passes anymore?
I wouldn't be surprised if Beyoncé next tour will be seen from Netflix. Ain't no more tour bih. Thanks Atlanta! #OTRII pic.twitter.com/wUw7qzfgDn

Y’all wondering why Beyoncé don’t do meet and greets no more. Which one of y’all Atlanta gays got on stage and tried to run on Jay, like that! You thought!

According to Billboard, the couple are scheduled to be on the road for another month and a half and the tour is expected to pass the $250 million mark when it concludes in Seattle on October 4.

An employee at the venue said no one was available to comment. BuzzFeed News has contacted the tour’s promoter, Live Nation, for comment.